The London Premiere of Disney's "The Lion King"

The London Premiere of Disney's "The Lion King" was held in Leicester Square in London. The event supporting the conservation work of HRH The Duke of Sussex through the Royal Foundation, included top royal and celebrity guests. The Duke and Duchess of Sussex along with the film's songwriters, Sir Elton John and sir Tim Rice and composer Hans Zimmer were in attendance. Cast members Beyoncé Knowles-Carter (Nala), Seth Rogen (Pumbaa), Chiwetel Ejiofor (Scar), Billy Eichner (
4 views0 comments
Loretta Garcia

Disney's The Nutcracker and the Four Realms Review

Disney's The Nutcracker and the Four Realms brings to the screen, a new twist on the original ballet classic. While the story includes a tribute to the original, Disney takes this version into a new and unique path. Continuing the success of their live action films, Disney filmmakers capture the magic in each scene with incredible costumes by the talented Costume Designer, Jenny Beavan. From the gorgeous dresses to Clara's soldier uniform, every piece was a perfect fit cap
7 views0 comments
Loretta Garcia

The Magic is coming!

“Mary Poppins Returns.” opens in theaters nationwide December 19! An all new original musical and the sequel to Mary Poppins, our favorite nanny, played by Emily Blunt is back in town to help the Banks Family find joy and wonder after a personal loss. Along with Jack, an optimistic street lamplight, Mary Poppins brings her magical skills and unforgettable adventures to a new generation. Produced by John DeLuca and Marc Platt with Callum McDougall as executive producer and Rob
10 views0 comments
Loretta Garcia

A peek at Disney's The Nutcracker and the Four Realms

Disney’s 2018 holiday feature film “The Nutcracker and the Four Realms,” hits theaters on November 2nd! Walt Disney Studios tells the tale of Clara (Mackenzie Foy) who longs for just one thing. A one of a kind key that will unlock a box that holds a priceless gift. At the annual holiday party of her godfather Drosselmeyer (Morgan Freeman) she is presented a golden thread. This leads her to the coveted key which instantly disappears leading Clara on an adventure into a
5 views0 comments
Loretta Garcia

Disney's latest live-action film “Mulan,” has begun production. Based on the 1998 animated film, Disney has confirmed Liu Yifei will be starring in the lead role of Mulan. Filming on location in New Zealand and China, Mulan will bring to the screen the epic adventures of the eldest daughter of an honored warrior who disguises herself as a man to take the place of her ill father, becoming one of China's greatest warriors. A star studded cast including Donnie Yen as Commande
5 views0 comments 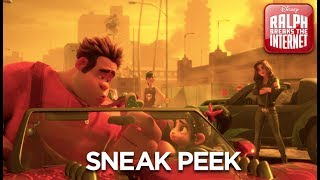 Wreck it Ralph is Back Creating Internet Chaos

Wreck it Ralph and Vanellope return to the big screen as they take on the Internet. While searching for a replacement part for Vanellope's game "Sugar Rush", they take a journey into the world wide web. Relying on the citizens of the internet, the Netizens, they navigate the Internet and run into Shank, a talented and tough driver whose home is an intense online racing game called "Slaughter House". Meeting Shank (voiced by Gal Gadot) gives Vanellope a whole new look int
12 views0 comments
Loretta Garcia

Disney Begins Production on "The One and Only Ivan"

"The one and Only Ivan" an adaptation of the Newberry award winning book by Katherine Applegate, begins production at the Pinewood Studios in London. The film is based on the true story of a group of animals who share a habitat at a suburban shopping mall, including the very special and talented gorilla, Ivan. Their living space creates a special bond and friendship between the animals. "Sharing the beauty of friendship, the power of visualization and the the significance o
13 views0 comments
Loretta Garcia

On April 27, 2018, Marvel Studios will release the much anticipated and deadliest showdown in the history of Marvel films. Ten years in the making, “Avengers: Infinity War” takes The Avengers and their Super Hero allies on the mission of their lives. In order to defeat the powerful Thanos they must be willing to sacrifice everything. But will they succeed? I am counting the days, hours and minutes until the April 27th release. Directed by Anthony and Joe Russo and produ
2 views0 comments
Loretta Garcia

Marvel Studios has started work on their latest film, “Captain Marvel.” Shooting throughout the Los Angeles, California area including Fresno, California, and locations in Louisiana, including Baton Rouge and New Orleans, the film is scheduled for U.S. theaters on March 8, 2019. “Captain Marvel” is directed by Anna Boden and Ryan Fleck with an amazing group of talented writers, Meg LeFauve (“Inside Out,” “The Good Dinosaur”), Nicole Perlman (upcoming “First Man,” Marvel Stu
3 views0 comments
Loretta Garcia

We were excited to see if Disney/Pixar's newest film, "Cars 3" would live up to the hype created by the previews. We were not disappointed. Director Brian Fee, who also worked on the first two Cars films as storyboard artist, along with writers, Kiel Murray and Bob Peterson and screenwriter, MIke Rich took the original “Cars” story of the comeback kid and gave it a new Disney / Pixar spin. "Cars 3" refocuses on McQueen and the racing circuit, bringing back the appeal and a
7 views0 comments
bottom of page